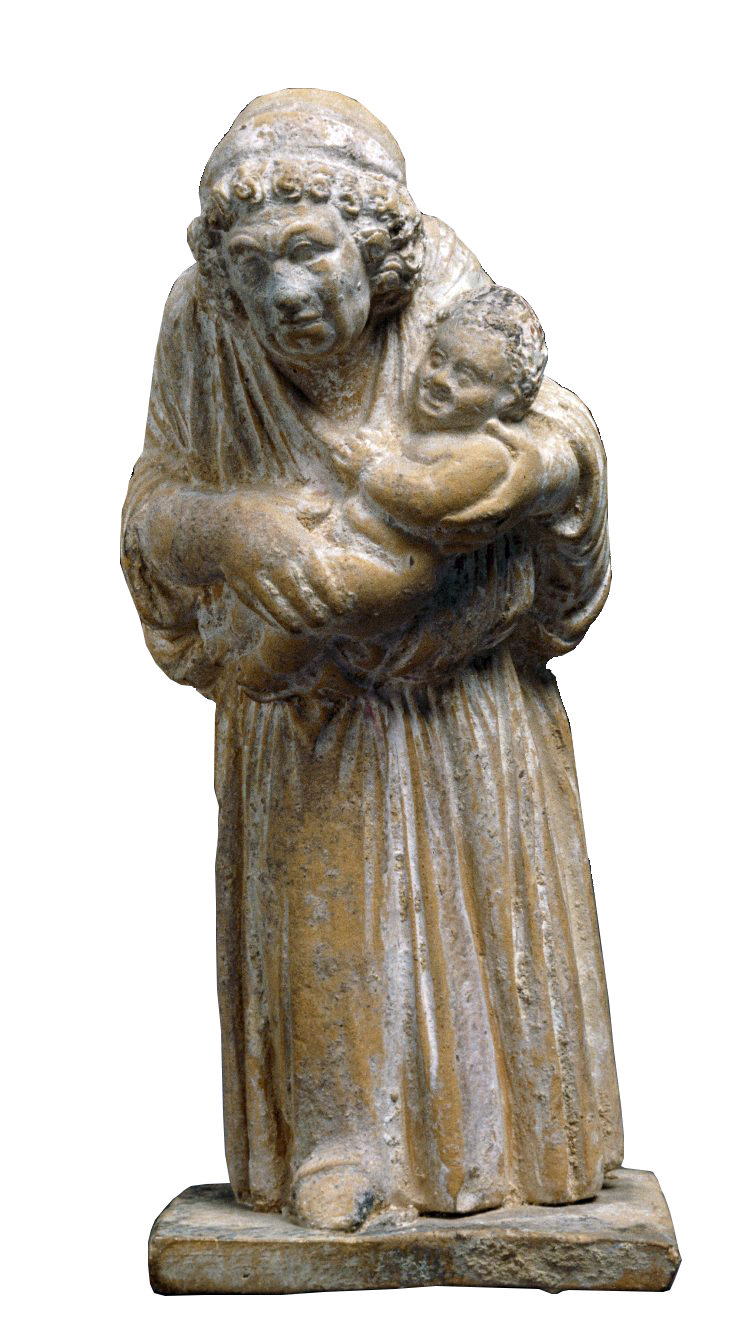 1. Distinguishing female figures from their hairstyle: slaves, matrons and divinities, in the Greek, Italic and (Gallo) Roman worlds (5th century BC to 5th century CE).

As evidenced by the important research program conducted by Florence Gherchanoc and Valérie Huet between 2004 and 2009 entitled Getting dressed, undressing in the old worlds, research on ancient garments has raised some significant research gaps. Thus, hairstyle as a headdress is a neglected subject that deserves to be considered. We propose to remedy this lacuna by taking as a starting point a curious and soft hat worn by some nurses and / or figures taking care of children on Roman sarcophagi. Hardly noticed or mentioned, this hat seems however to distinguish nannies from mothers when breastfeeding children. But how to interpret a woman wearing the hat lifting a child from his (first) bath? Did it point to a function or a profession (that of a midwife) or even a servile social status?

These questions which feed our research on the condition of wet-nurses, has important implications for small statuary, i.e. on the interpretation of terracotta figurines. Indeed, this specific production, which existed in the different cultures our project focuses on, remains a hotly debated topic among specialists. It is not so much a question of deciding between servile and free status but between mortal or divine figures.

The identification of this peculiar hat creates an intercultural link between the ages and leads us to re-assess some female headdresses over the long-term (from the 5th century BC to the 5th century AD). Our aim is to highlight the association of certain hairstyles with certain individuals, in order to ascertain their status. While coroplasts are limited by their specialism (usually limited to a single item of furniture: e.g. an armchair), other iconographic media are more promising in terms of contextualising individuals (decorated background, other figures, etc.).

Thus, our project considers a choice of female headdresses (soft hat, veil, sakkos, polos, etc.) depicted on 4 different media (statues and statuettes, vase-paintings and murals) to determine whether a type of headdress was used to represent a category of individual or even a specific (mythological or a trade) figure.

Taking as epicentre Imperial Rome and the Italian peninsula, our project aims to verify the longue durée of iconographic representations and of politico-social practices by comparing in parallel Greek and Gallo-Roman artefacts. This comparison is envisaged during the third year of the project after a meticulous iconographic study of the images dating from the imperial era and then comparing them to those dating from the fifth century BC to the end of the Roman Republic in 27 BC.

2. The origin of the vases called gutti, and the reasons that pushed the ancient Greeks to deposit them in children and adult burials (in collaboration with Dominique Frère and Carla del Vais, Università degli Studi di Sassari).

This study builds on my doctoral thesis From breast to bottle: material and symbolic culture of feeding toddlers in Roman Gaul [see below]. Towards the end of the research carried for my thesis, new questions were raised. The food and therapeutic function of the so-called ‘baby bottles’ was established, but this lead me to wonder why they were deposited in adult and children graves, both among the Gallo Romans and earlier among the populations of Greece, Sicily, Sardinia and the Italian peninsula. The origin of the deposition practices of these bottle-feeding vessels has yet to be established and seems more complex than it seemed at first. Thus, a review of these specific vessels in these various cultural contexts is planned: a stylistic and typological study coupled with biochemical analyzes of the content of these vessels.

3. The milk of plants, its use and symbolism in the Greek and Roman worlds, (with Isabelle Boehm, University of Light Lyon 2).

Plant metaphors are almost omnipresent, according to Florence Dupont, when representing man’s growth development. We find them too in representations of family ‘lineage’, as shown by a recent study on filiation plant metaphors in the Roman world. In the pathological and anatomical domains, whether it is to designate parts of the body of a healthy man or, on the contrary, to name abnormal growths, plant metaphors are also often used (cf. F. Skoda’s important study). Vegetation is also particularly suitable to be compared to the human body, inasmuch as various liquids, such as sap, travel through the body of the living plant in a similar way as the liquids that flow through living men.

There is however a liquid with a special status, milk: nourishing and maternal, it is characteristic of mammals. Yet, certain seemingly ‘milky’ plant humours led Greeks and Romans to create metaphors to compare humans and plants. What type of metaphors are these? In what way do they function, from plant to human or vice versa? To answer this question, our research will focus on medical, philosophical, biological, and naturalistic treatises in Greek and Latin, from the 5th c. BC to the 5th c. CE. We will discuss the process at work and its potential importance in the Greco-Roman world.

– to identify the contents of the containers by biochemical analyzes and to specify their effective use according to the contexts (domestic, funeral, cultual or artisanal);
– to identify the imported substances and update phytochemistry reference depositories;
– to seek the dietary, therapeutic, ritual, artisanal or other finality of the preparations in the ancient and medieval textual sources.

From the earliest artistic depictions on record, homo sapiens have been fascinated with the human anatomy, including its genitalia. The study of this material is vital for understanding ancient perceptions of gender, sexuality, and the human life cycle, although much of the relevant material – including statuary, frescoes, vase paintings, hermaic pillars, votives and figurines, gems and amulets – remains uncatalogued and/or unpublished.

Our team is planning to construct an online database of material related to artistic representations of human genitalia from the Mediterranean basin, including but not limited to Greece, the Levant, Egypt, and Rome and its provinces, from the seventh century BCE to the fourth century CE. The project, entitled Representing Genitalia in the Ancient Mediterranean: Digital Cataloguing Project will consist of a website hosting a searchable database of relevant material, periodic blog posts discussing and interpreting some of the artefacts included in the database, and occasional longer papers to be posted by researchers on the site. The material included in the database will later form the basis of research papers to be presented at colloquia hosted by our group. These papers will then form the basis of special editions of a journal or edited volumes in the future.

From breast to baby bottle: material and material culture of infant (0-3 years) – feeding in Roman Gaul (1st century BC to 5th century CE).

Ever since their discovery in the nineteenth century, the function of small elongated glass and ceramic vessels is debated. The nozzle at the end of these vessels led archaeologists to designate them as baby bottles or pacifiers as they are often found besides child burials.

This study uses textual, artefactual and iconographic sources to reconsider the use of these vessels. Besides a review of their mention in Greek and Latin texts and in iconography, remedies involving substances and blends similar to those identified by residue analyses are found in Roman-era medical treatises.

Then, the focus shifts to theories elaborated by Greek and Roman physicians and philosophers regarding milk and its production among humans and animals in order to consider the impact of its vital nourishing function on infants: health, common ailments, their cures, nursing and weaning practices, maternal milk versus wet nurses. The thesis closes with the analysis of funerary material to determine weaning age and the associated rites de passage.

This site uses cookies. By continuing to browse the site, you are agreeing to our use of cookies.

We may request cookies to be set on your device. We use cookies to let us know when you visit our websites, how you interact with us, to enrich your user experience, and to customize your relationship with our website.

Click on the different category headings to find out more. You can also change some of your preferences. Note that blocking some types of cookies may impact your experience on our websites and the services we are able to offer.

These cookies are strictly necessary to provide you with services available through our website and to use some of its features.

Because these cookies are strictly necessary to deliver the website, you cannot refuse them without impacting how our site functions. You can block or delete them by changing your browser settings and force blocking all cookies on this website.

We also use different external services like Google Webfonts, Google Maps and external Video providers. Since these providers may collect personal data like your IP address we allow you to block them here. Please be aware that this might heavily reduce the functionality and appearance of our site. Changes will take effect once you reload the page.